I Got Satellite Television Today!

As a French expatriate living in Bangkok, it is quite difficult to find a Thai TV program that I enjoy watching. I do not watch lots of TV, but sometimes I miss French TV, its entertainment programs, TV series and news. It is why I was in search of getting myself “TV5 Monde” with satellite television. 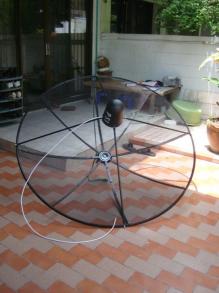 I used to have this French channel and many others with a True satellite dish in the old house I was living 6 years ago, and then in the couple of apartments I rented in between.

The problem with this kind of satellite television is that there is a monthly fee, which is not necessarily worth paying considering the little time I spend in front of TV. And the 3 or 4 channels I am interested in are of course always in the most expensive package.

I also used to have cable TV a while ago in my new house to receive the Thai TV channels clearly and of course “TV 5 Monde”. The monthly fee was affordable, but then after 6 months they decided to remove the French TV and replaced it with another Thai TV channel… I cancelled the service and used the regular antenna for Thai TV.

As my wife and I were shopping at the local Big C, a satellite television stand was there with special offers… I enquired to the sale person about what dish I needed to receive my favorite channel and I was told that only “Asiasat” was able to offer me that with lots of Chinese, Indian and Middle-east channels. Another option was also very tempting with more French and foreign news channel, but I couldn’t have “TV 5 Monde”. 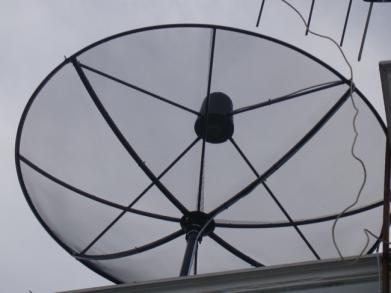 The same dish, which is huge in size, can receive both sets of TV channels but the position of the dish as to bee changed, which is not very convenient. I don’t see myself calling the TV guy to move the dish each time I want to change channel… especially now that it is on the roof of the building. Another huge dish would be the solution for the other set of channels, but this was not necessary at the moment. 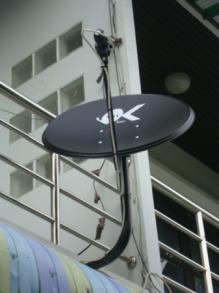 One problem though, was that we still did not have Thai TV with that huge dish and we had to install another smaller satellite television dish in order to receive Thai TV. This was much easier and faster to install as the cable going to the TV was already there.

We have now two satellite television boxes connected to the same TV, one on AV1 and the other on AV2. I hope it is not going to be a cause of fight with my wife!

Tonight we will watch a DVD anyway…