Marcel Kittel of Germany wins the first stage of Tour de France 2013 on Saturday. Minutes before the first group of riders cross the finish line a bus was stuck under an archway causing the organizers to think of moving the line at the last minute. The bus was then freed and moved successfully, but unfortunately another misfortune happened with the fall of a large group of riders.

The video below is not in English , but the quality is excellent. You will see clearly the fall, the bus and the winner!

Kittel ahead of Kristoff

The confusion brought about by the incident with the bus is causing a delay in delivering results. The finish line had temporarily been shifted forward by 3km but then, at the last minute, it was altered and the sprint took place as intended: where the finish was planned.

Marcel Kittel came up the left side of the road to overhaul Alexander Kristoffof Katusha.
17:17 The top five in stage one

Marcel Kittel claimed his first stage win in the Tour de France at the end of a day when crashes and an incident with a team bus made the finish rather confusing.

(We are awaiting confirmation of the result and will post the top five as soon as we can.)

17:13 Kittel takes the win and the yellow jersey

A few excellent photos of this Tour de France 2013. 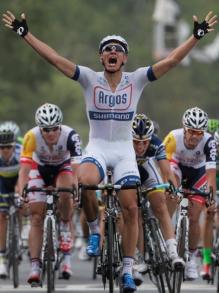 “I saw the crash happen to my right,” said Kittel, who also finished the day with the best sprinter’s green jersey. “I knew it was serious. I knew that Mark and Andre (Greipel) were no longer in contention and it was a good chance for us.”

Minutes before crossing the finish line of the 100th Tour de France 2013, a large group of riders crashed.

Two riders collided and one of them went down, setting off a chain of spills that scythed through the pack like a bowling ball.

A bus stuck at the finish line! 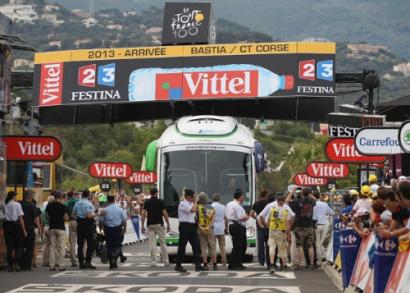 Riders began the first stage of the 2013 Tour de France Saturday, but a rambunctious bus beat them all to the finish line (and messed everything up in the process). The Orica GreenEdge team bus lodged itself underneath a gantry at the finish line, and officials had to scramble to move the bus before the cyclists crossed the finish line. They deflated the tires and eventually moved the bus in time.

I hope you enjoyed this article on the famous Tour de France 2013.